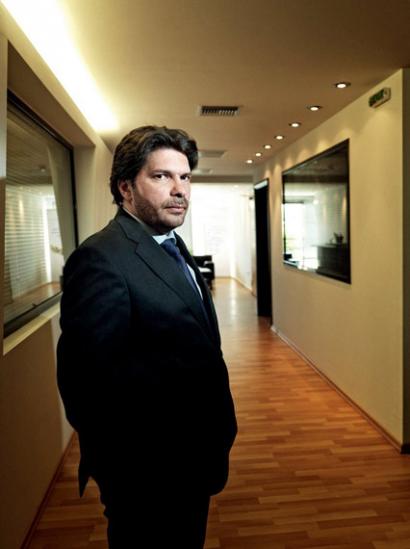 HOPING to overcome the prevalent atmosphere of economic decline and gloom in the country, a group of highly successful young entrepreneurs from sectors like retail to biotechnology have joined forces to offer their experience and advice to a new generation of Greek entrepreneurs. Vasilis Triantopoulos, head of the Young Entrepreneurs Association Hellas, represents the optimism of the endeavour, which they hope to take even to high-school classrooms.

Holding a BA in information management systems, he started his climb to business success at the age of 21 by representing several foreign information technology companies and internet service providers in Greece and the Balkans. Now, 19 years later, he is CEO of the London-based Bioaxis Healthcare, provider of specialised healthcare services throughout Europe and a board member of several hi-tech companies in Greece and abroad. In his interview with the Athens News, Triantopoulos explains why his success story can be emulated by a new generation of business starters.

Athens News: What are the principal goals of the Young Entrepreneurs Association Hellas?

Vasilis Triantopoulos: YEAH was created in 2007 under the brand name Young Leaders by a group of successful young businessmen to advance the common interests of youthful Greek entrepreneurs at home as well as abroad. The aim is to promote and instil the values of entrepreneurship in the younger generation of our country which remains full of vitality, dynamism and fresh ideas despite the difficult times and is looking for ways and means to realise its dreams. In our seminars and conferences we try to provide these young people with appropriate ‘mentorship’ - the role models they should emulate and the necessary skills, infrastructure and guidance they need in order to succeed. We help them overcome their fear of failure by applying Aristotle Onassis’ famous motto, “Failure comes only when you stop trying”. At the same time, we consult with other businesses or chambers of commerce on joint initiatives and contacts with senior officials at the development ministry to alert authorities about bureaucratic or institutional obstacles to new business ventures and to propose measures to rectify the situation.

Speaking about authorities, are you in contact with the troika, Greece’s creditors?

We have met on several occasions with troika mission staff in Athens to inform them about reform priorities, market data reliability issues and problems confronting Greek entrepreneurship. Unfortunately, the troika policy guidelines are often implemented by the government in a one-sided manner because local politicians have no interest in public sector cutbacks or in fighting tax evasion and corruption without penalising local entrepreneurship. On the other hand, no successful professional or businessman would risk working for the common good by assuming government duties without being firmly assured that his hands won’t be tied by vested interests in the public sector. You can’t have somebody like [Lucas] Papademos for prime minister and somebody like [Evangelos] Venizelos heading the finance ministry. Technocrats and politicians can’t work together. I think that this is the moment Greece truly needs a technocratic government - not just a technocrat prime minister - for at least two years, to lay the groundwork for a modernised state.

What in your opinion are the troika’s errors which politicians may use to promote their own interests?

First of all, the troika is fed with erroneous statistics by the Athens Chamber of Commerce or by ministries about the aggregate number of business startups and closures in the country. We want to rectify this by showing that a great many startups are little more than shortlived attempts by one or two persons trying to break out of unemployment or to grab some ready-made investment subsidy, rather than to actualise an innovative idea with a coherent business plan and carefully planned steps. The majority of registered closures also fall under the same category as futile small-scale ventures that don’t survive more than two to three years. True business startups that satisfy the minimal criteria of longterm viability and success are few and far between. At the same time, existing business regulations prevent the closure of significant enterprises with a track record of more than five years and several employees on their payroll, pushing the companies to the brink of collapse by massive debts. It is therefore not enough to eliminate the paperwork and simplify procedures through one-stop-shops for the startup of new enterprises. It is equally important to give failed enterprises a second chance by facilitating the closure in time to release captive financial resources for a new job-creating investment.

On both counts, the policies currently pursued are simply wrong and self-defeating. Lawful business and property are being taxed so heavily, it verges on expropriation. At a time when the prime objective should be restoring competitiveness by enhancing the country’s comparative advantages and export orientation, promising business ventures in sectors like Greek organic foods or other agricultural products are burdened with taxes that sometimes reach 85 percent of company profits, often on the basis of “objective criteria” that bear no relation to actual performance. But this destructive tax policy arises from the refusal of the political system to curb wasteful state expenditure at the start of the fiscal adjustment process in 2010. Instead of releasing resources from the public sector, the state has decimated the private sector, pushing thousands of firms to closure or relocation abroad.

What about the fight against tax evasion?

It is not really a fight but a cop-out that results in the incrimination of entrepreneurial activity, without any benefit for the state in terms of even the slightest increase in revenues, the expansion of the tax base or the promotion of market legality. Instead of obliging all traders to issue receipts and submit to regular inspections through a combination of penalties and rewards, the state is forcing consumers to collect masses of receipts, which seldom leads to catching tax evasion. On the other hand, publishing lists of tax debtors with uncollectable liabilities or dramatically arresting and releasing of a handful of alleged tax offenders is useless. These are measures that only serve to terrorise rather than enforce the rule of law and transparency in market transactions. Enterprises must deal with a maze of incoherent regulations and the threat of fines at every step of the way. This ultimately encourages tax evasion as well as corruption and graft. In England, fines are reserved for minor tax offences and only for first-time offenders. The second time means loss of licence and closure. Making the risk of tax evasion more costly than recognition of legitimacy is the key to an effective taxation system.

How can YEAH help young entrepreneurs cope with these drawbacks?

Apart from advising and supporting them with our seminars and official interventions, we are pushing for specific reforms regarding the infrastructure of business activity. Public and EU funds made available to individual projects could be used more productively to create public networks of research and development, investment boards by sector or export marketing services through Greek embassies. Countless public buildings remain vacant when they could be providing subsidised office space for small business startups. There is no shortage of inexpensive and practical ideas we can offer the development ministry or the troika if they are willing to listen and take action.