To save itself, Greece must realise that its crisis is the result of three decades of incompetence and corruption 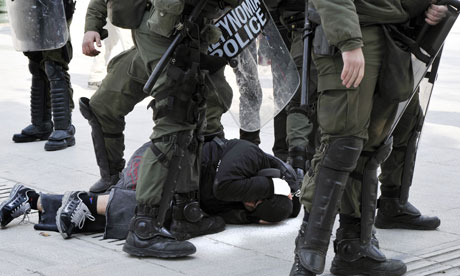 Although a minority protest, 'the majority of Greeks face the crisis by trying to make ends meet'. Photograph: Louisa Gouliamaki/AFP/Getty Images

Contrary to what outsiders may think, most Greeks do not spend their time throwing Molotov cocktails, or even protesting. In fact, though the austerity measures demanded by our international lenders have affected millions of lives, some hundreds of thousands of them dramatically, the great majority of Greeks face the crisis by doing what most people do during hard times: they try to make ends meet as best they can.

Yet this does not make good television, while militants in hoods and gas masks firebombing policemen does. So, many non-Greeks believe Greeks are not just lazy but also ungrateful and, probably, mad. None of these generalisations is true: most Greeks are hard-working people, the extremists who provide such great TV to the world number no more than a thousand, and the great majority of the demonstrations that daily disrupt Athenian life are only attended by a few hundred cadres of the parties or public-sector employees' unions organising them.

This is not say Greeks are happy with their situation. They are not. But though the hardships of many, especially the jobless, are undeniable, I believe our despair is more due to ignorance than anything else. In fact, though I generally subscribe to less optimistic explanations of human motivation, the present Greek crisis reminds me of Socrates's most-often quoted piece of wisdom: that all evil is due to a lack of knowledge. I can't help thinking that if only someone (old and bearded, ideally) could reveal the essence of our problem convincingly, then Greeks and non-Greeks alike would see the truth, and implement the actions necessary to solve our problems. For you cannot have good therapy without good diagnosis.

What makes ignorance particularly frustrating in this case is that the facts are at our fingertips. Let me give you one: although 750,000 people (15% of our workforce) have lost their jobs since the crisis began, not a single one is from the wider public sector, which employs one out of four Greeks.

The story behind this figure tells us all we need to know. First: what we call a crisis is the result of actions performed over decades. Second: its creator is an ineffective, incompetent and corrupt political establishment, which transformed politics into a mechanism for exchanging favours with votes, most of the former having the effect of making the state more ineffective and costly. Third: the critical point came when this mechanism became so ineffective and costly that it brought down the rest of the economy. Of course, the international financial situation, banks, speculators, crooks, etc played their part in making things worse. But they couldn't have done so if Greek politicians had not destroyed, over 30 years, the heart of our economy.

Today, politicians are bickering about who is doing more to save the country: the loan-signers, who are agreeing to more and more austerity measures, or the loan-deniers, proposing what they call a "nationally proud solution", a catchphrase that appears in various forms in the rhetoric of extreme right and extreme left alike. But both sides are denying a truth: the loan-signers that the reason more austerity measures are required is that they are unable and unwilling to cut public spending in rational ways; and the loan-deniers that their "proud solution" is a synonym for the indescribable misery of default. Both are lying for profit: the first to protect their clientelist networks, financed by public money, the second to drive Greece to the state of chaos and misery that forms the preferred habitat of extremist politics.

Actually, we don't need a bearded old man to tell us the truth about the crisis, but a little boy. For the statement that Greek politicians are to blame is as obvious as the emperor's nakedness in Hans Christian Andersen's famous fairytale.